I’m very interested in forms of mysticism. I think mysticism is essentially cinematographic. It’s present in my form of expression, it’s a vision that is very rich and something that I think has a lot in common with cinema. In fact, I think that mystical experience helps me understand cinema better. When you’re approaching mysticism, then you’re dealing with something that has nothing to do with the rational, logical mind. It reaches zones or areas touching on ecstasy, ecstatic experiences that I find absolutely astonishing. And I feel that when I’m making a film very quickly, I reach over into this other side, I attain this nonlogical, nonverbal area. It’s an experience I don’t entirely understand, but which interests me deeply. – Bruno Dumont.

The above citation is taken from an interview with director Bruno Dumont for Filmmaker Magazine in 2010, in which he discusses his filmmaking, and this passage in particular informs my approach to his astonishingly affective film, Hors Satan.

Dumont’s sixth feature film Hors Satan [Outside Satan, interestingly Fuera de Satan in Spanish] is on general release in London this week. I watched it yesterday afternoon at Curzon Renoir and am still mulling it over. It made me incredibly tense, which is quite a feat for such a slow-paced film with sparse dialogue. For the first ten or fifteen minutes all I could hear was a noise in my own head, Why? Where? Who? ..to accompany the long establishing shots of the Pas-de-Calais region near Boulogne, and to question the movements of two silent characters set within them. The landscape begins to feel familiar over the course of the initial scenes. The undulating expanse of the coastal village and its surroundings is revealed through the eyes of a character who sleeps outdoors, relies on the kindness of locals for food, and sporadically falls to his knees, arms outstretched to the sun or the horizon before him, as if collecting raw spiritual energy. When not following his point of view, the camera tracks the man’s slow progress as he walks up and down between the village and the sea, stopping to light fires or perform his genuflections. At times the shots are cut more rapidly, and feature close-us that disorientate as the focus shifts in and out.Often the only sound is that of the wind and the laboured breath of the man as he moves over the land. Dumont names this character le gars (the guy), which reminds me of Murnau’s nameless protagonists in Sunrise denoting an ‘everyman’ or ‘everywoman’. To David Dawaele’s ‘guy’ comes Alexandra Lemâtre’s ‘Elle’ (Her, the girl), a pallid, sensitive teenage girl (I refuse to call her a Goth as other reviews have done – this is a lazy comparison) desperate for the means to escape from her abusive step father. Infatuated with the guy, the girl spends the majority of her days following him, his routines shaping hers. He rejects her advances, seeming to respect her innocence and youth. 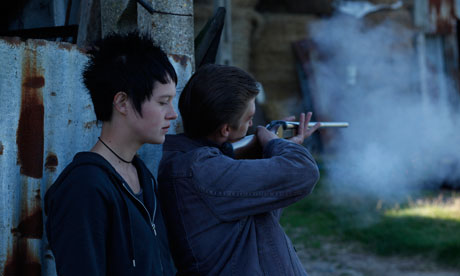 Given that the rhythm is set by the slow repetition of the couple’s movements through their rural existence, whenever the guy acts to protect the girl his spontaneous violence seems doubly shocking. He picks off the evil step father with a single close-range rifle shot as the girl stands by his side in silence. A local boy who has shown interest in her is subsequently bludgeoned to death by the guy with a stick. This sudden, controlled violence interrupts the rhythm of the landscape; Dumont leaves little space for the spectator to imagine and thus prepare for the guy’s actions. The shift in the length of the shots between the panoramic long shots of the countryside and the close-ups of the characters exacerbates these explosive contrasts.

I don’t wish to continue with a plot synopsis, but instead focus on the role of the supernatural in the film, with recourse to the director’s own words, above, on the mystical.

In his introduction to The Postmodern Condition, Jean- Francois Lyotard makes an interesting point about the role of modern art. He argues that what is ‘at stake’ in modern painting is making visible that which cannot be represented: ‘something which can be conceived and which can neither be seen nor made visible.’ (Lyotard, ‘Introduction’, Bennington and Massumi, 1984) This is something that Surrealists and magic realists alike have sought to capture in their work. In the modernist avant-garde, which railed against rationalism and the sublimation of magical, mystical, and sensationalist content in art, artists played with the imperceptible join upon which fantasy and reality, one’s conscious and unconscious lives converge. For Dumont this state of being is ecstatic, non rational, and non-verbal. It is less to do with the good and evil usually associated with religious doctrine, and more to do with the shifting, intangible mysticism of life itself. The main character receives and gives something that we can only measure by its results: his outstretched arms take in something unseen from nature and in return he is able to suck sickness from a child, fuck demonically charged energy into a passer-by, set the land on fire and then extinguish it, and finally reanimate a dead corpse. Reanimation of the dead is not simply a fantasy as is often portrayed in the horror genre, but a chillingly uncanny possibility of modern science, and a philosophical metaphor in many cinematic works. In Dumont’s hands, the scene in which the girl’s body ‘wakes up’ seems impossible, and yet given the traumatic circumstances of her attack, could plausibly (we do not witness an autopsy) be a regaining of consciousness. The girl staggers home to her mother, who reacts in sheer terror upon witnessing the figure of her resurrected daughter. This sequence recalls something of the Edgar Allen Poe tale, or the ‘resurrection’ morgue scene in Alexander Sokurov’s Days of Eclipse.

The resurrected body is the final sign we witness of the guy’s supernatural power, yet we are no closer to knowing what this is, or how, fundamentally, this works. His pagan rituals, echoed in the film’s title suggest a demonic possession of nature’s powers, but he remains outside, unnameable, as we try to reconcile the purpose of his deeds and their physical violence. Yet, as a spectator, at no point did I disbelieve what I saw. This is primarily due to Dumont’s skill at making the ordinary, if isolated, rural village and the chain of events seem realistic; hyperreal. Hyperreality, not in Baudrillard’s postmodern sense, but in the modernist Neue Sachlickeit sense, aims ‘to suggest the mystery of the unconscious mind by translating the most usual objects into sentimental terms, into forms as bizarre, as disturbing, as melancholy, as tragic and nightmare-like as possible.[i] Hyperrealism is an augmentation of reality determined by affect. Affect[i] in Dumont’s film is produced by the overlap of real and horrific violence, supernatural, unexplained shifts in nature, and the emotional scars carried by the characters. The combined impact of the affect causes the landscape to seem invested of special powers – the fire, wind, sun, rocks, flora and fauna – and imbues the film with an unheimlich, non-logical yet emotionally stirring version of the world. In his review of the film for Sight and Sound, Tony Rayns writes that regardless of whether you think ‘Dumont is inspired, deluded or fraudulent, there’s no denying that his project has a certain berserk integrity.’  As for the title, there is nothing outside or inside Satan, for as John Milton’s rendering of the myth illustrates:

The mind is its own place, and in itself

Can make a Heav’n of Hell, a Hell of Heav’n. (Satan: Paradise Lost)

Life, beyond life, outside life – there are no clear dividing borders, no compelling, binding words with which to fix our existence outside of the purely social.

For me, the film is not about retribution, or the battle of good and evil, but the visualisation of hidden energy (spiritual faith, superstition, trauma, desire) in a hyperrealised representation of everyday life. Hors Satan makes us feel the improbable palpitating in our veins.

[i]Attempts to theorise affect have been numerous (Spinoza, 1677, (English version, 1883); Tomkins, 1962, 1963; Deleuze and Guattari (throughout their work); Sedgwick and Frank, 1995; Massumi, 2002), and it remains a vast and contradictory field. In Part III of his five-volume Ethics, entitled ‘On the origin and nature of the emotions’(1667), Baruch Spinoza (1632-1677) defines affect as mixed emotional responses to objects and ideas in the exterior world that may or may not be conscious: ‘Everyone shapes his actions according to his emotion […] a mental decision and a bodily appetite, or determined state, are simultaneous, or rather are one and the same thing’ (Spinoza, III, Prop II). Affect is comprised of both ‘primal’ (instinctive) and cognitive processes, yet it needs, like the structure of magic realism, some contradiction or tension to proceed. Spinoza divides affect along positive and negative lines, with joy, pleasure, and love belonging to the former, and suffering, pain, jealousy and hatred to the latter. Each emotion, or affect, is replaced and overpowered by subsequent affects in the constant metamorphosis of existence – of becoming. According to Spinoza, affect is, for the most part, structured by a social conditioning in which certain common links between objects and emotional response exist (for example fear or hatred of an object that has been publicly constructed). However, there is also room in his list of emotional responses for ‘vacillations of spirit’ or ‘Wonder’, an affective state linked to things never experienced before: a ‘mental modification, or imagination of a particular thing,’ that is ‘alone in the mind’ (III, Prop LII). Imagination, is described as an active, conscious process in which the subject deliberates over a set of images based on prior experience, rather than the domain of dreamy, magical realms and fantastic utopias. More recent criticism on affect has tended towards commentary on the ‘virtual’ or ‘unrepresentable’ aspects of existence or, to put it plainly, the accumulation of affect in the relation between the living and the non-living; the affect created in the political relations between states and systems; incremental shifts in the relations between things that go beyond earlier theories of emotional resonse. Not all theories of affect are political, but most implement a structural analysis that examines transition, crisis and convergence in the relations between the subject and the socio-historical. In their introduction to The Affect Theory Reader, the editors surmise that there can be no general theory of affect. Their volume, however, fills in many of the gaps left by earlier theories, picking out what they call the ‘palimpsests’ of affective ‘force-encounters’ that pass between objects for investigation – in other words, the traces of non-objective interaction. They state that although affect is synonymous with force, it is not forceful, and most often transpires in the’ miniscule and molecular events of the unoticed’ . (Gregg and Seigworth, 2010, 2)