Imagine now, amongst the burgeoning racks of advert-stuffed magazines; the piles of independently made fanzines or collections of short stories and the more successful volumes of McSweeney’s;  or the infinite and tentacled pool of webzine content, imagine a slim rectangular box. This cardboard box contains essays, drawings, objects, films, and audio recordings crafted by the most innovative contemporary artists, filmmakers, musicians, journalists and writers. It bursts with theoretical concepts that will eventually become some of the most well-known and debated on university campuses and in cafés. It is delivered by hand to your letterbox.Who would you want to contribute to this portable archive?

In 1965, New York journalist Phyllis Johnson (under her maiden name) founded Aspen a magazine encased in such a rectangular box. The magazine ran from 1965 to 1971, and featured the words, sounds, and images of such luminaries as Roland Barthes, Hans Richter, Susan Sontag, Andy Warhol, John Cage, Lazsló Moholy-Nagy, Samuel Beckett, and Marshall Mcluhan. As the advert for the first issue, below, suggests, Johnson desired to create a ‘three-dimensional’ magazine, the equivalent of an exhibition space or a concert venue in your own home. And as far as sensory reception went, Aspen was designed to affect its consumer across all senses. 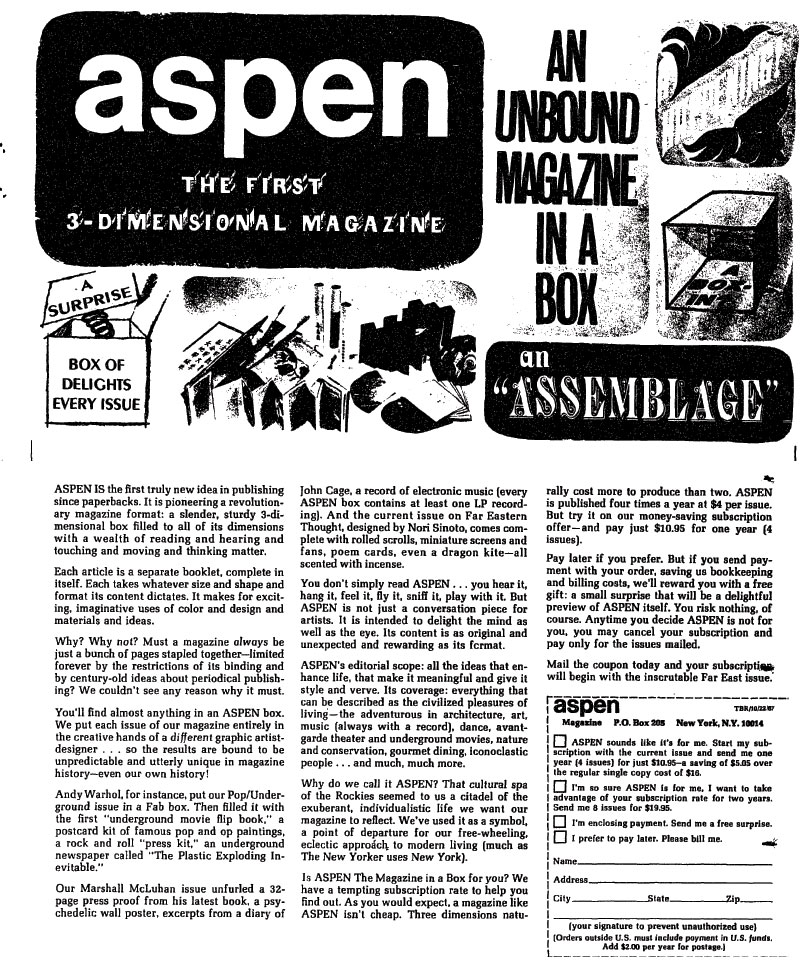 ‘In calling it a “magazine” we are harking back to the original meaning of the word as a “storehouse, a cache, a ship laden with stores.’ Johnson, cited in Allen, Artist’s Magazines: An Alternative Space for Art, 2011, MIT Press, p.43

If this sounds like the kind of experience you hanker after, you can see the original issues – complete with film screening – at the Whitechapel Gallery, running until 3rd March 2013, in Gallery Four . It is a fascinating display, a three-dimensional document of the late ’60s, a collection of both powerful and silly ephemera. It is currently my favourite room at the gallery (I’m not a fan of Mel Bochner – who also collaborated in Aspen – but do check out the amazing tree work commissioned by Giuseppe Penone). Of the Aspen issues, I have a particular fondness for the double-issue 5&6, which delights with Barthes’ now infamous essay on ‘The Death of the Author’ – the annotated version complete with Barthes’ own notes hangs on one of the walls. You can peruse the full list of contents on Mubi, and also sample Moholy-Nagy and Richter’s contributions.